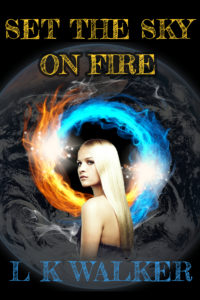 Set the Sky on Fire is the first book in the Fire Trilogy. To read the first two chapters click here.

Eighteen-year-old Ari Taylor glimpses two unearthly strangers in her friend’s backyard. Then, just as quickly as they appeared, they vanish. It’s not until one shows up at a funeral that Ari is able to sense his vile nature.

The man is dangerous, a Seether, defying human bounds, and he wants Ari, at all costs.

Meticulously, he stalks her, waiting for her to be alone. Finally, he has his chance. Realising her mistake too late, Ari is caught in his trap.
But the dangerous man isn’t the only prowler in the woods. Nate, who has walked this earth for hundreds of years, fights to free her and together they run.

As Ari learns what the seether wants, she begins to understands that he could use her to devastate this world. The hardest decision is before her. She and Nate become close but will he become one more person she will have to leave behind when she is forced to decide our fate?

Time for the hunt.

In this second book of the Fire Trilogy, Ari takes matters into her own hands and begins tracking seethers down, one by one. She quickly discovers they’re not as vulnerable as she first thought. In an attempt to learn more about what she is up against, Ari and Nate seek out the help of sentinels. But telling friend from foe is not always as easy as it seems.